There are times when you should probably wait a few days, think about what you want to say and then edit or delete… before hitting send. Time and flat seas always change my perspective and this time was no exception- more on that later.

The good news is we’ve reached the Galapagos. We are currently anchored in Puerto Baquerizo Moreno on the island of San Cristobal after arriving early this morning- this post was started a week ago.

Lilly celebrated her 10th birthday by crossing the equator and we’re now officially in the Southern Hemisphere.

There are Sea Lions splashing and playing around the boat, in fact we’ve had to rig up a barrier to stop them from getting into the cockpit but the kids and I are still hoping one will find it’s way onto our back step.

We had three Red-footed Boobies hitch a ride with us during the last few days of the crossing- “Barry” arriving first, sitting on our davits at the back of the boat, before settling in on the pulpit, (on the bow) for the night. He came back twice before heading off, then “Bingo” and “Beatriz” joined us simultaneously on the bow- Bingo happy on the pulpit and Beatriz settling for the anchor. Both left substantial ‘birthday messages’ for Lilly on the morning of the 21st!

Morning with the kids!

King Neptune also joined us for our equatorial crossing- a tradition of initiation for “Rookie” or first-time crossers, orchestrated by the Sea-faring Monarch. There was a startling resemblance between our King Neptune and his father, cementing my resolve that Aviator sunglasses and/or a beard will be avoided at all costs!

Right on the equator!!! 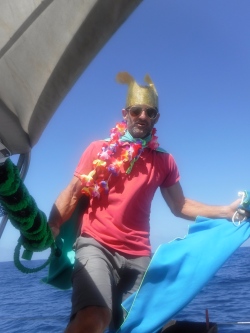 The kids were great along the way- both of them amusing themselves with various art projects or constructions- Seb at one point had the vacuum cleaner tube, (yes we do have one on board) rigged up with electrical tape out his hatch, (window), running marbles down into a cup onto his bunk. We were into calmer waters by that stage!

Despite my willing it and wishing for it and hoping with all my being, we were never going to make landfall before dark, so the last part of the journey saw us shortening sail and drifting silently and very pleasantly, towards San Cristobal so we could see the coast in the early morning and enter the harbour by daylight.

And so onto the actual crossing itself- well a week has passed and as is the pattern, the ‘trauma’ of that for me has lessened. Despite trying to gloss over the hard parts and focus on the humerous and positives, some days the negatives are way too top heavy! Yes I know, poor me, blah blah blah- hard to relate for most, especially when you see our pictures, however this sea-sickness BS is still a major problem. Oh that and the noise! Imagine if you will a heavy wooden door- spring-loaded. Then place your ear right beside the door and release the spring. If you don’t have a spring just get someone to slam it as hard as they can, over and over and over again, making sure your head is beside it the entire time!!!!! The trip took us 7.5 days, (that’s 24 hour days) and I was bad for about 5. I lay in my bunk wishing I was dead and actually saying it out loud a few times. The first day and a half I’d convinced myself I had Dengue Fever due to the backache that accompanied the other symptoms,(ha ha just due to lying down for so long), then I thought it was an ear infection due to the head splitting ache that covered my entire cranium,( ha ha ha just lying on the back of my head for so long). Turns out it was my old nemesis! I’m working my way through various sea- sickness medications and I’m hoping that the final one I took, which seemed to calm things down, will be my saviour. There’s a lot more to it than just feeling awful. I can’t help with anything, I can’t interact with the kids and I become a burden on anyone trying to keep the boat going in the right direction!

Onward and upward as they say, Slice of Life standing by!

2 thoughts on “I wonder if Darwin ever felt this bad…”