Leaving the calm of Bora Bora

Lets go on a little journey shall we, it’s a relatively short trip, 7-8 days from Bora Bora to Tonga, approximately 1280 NM, (see, I must be progressing if I can call a 7-8 day trip short!!!) For demonstration purposes you’ll need some equipment- a swimming pool and a drink shaker or a bathtub and cork will suffice for a smaller scale exercise. Now throw that shaker or cork into the water and make sure you have a way of really stirring up the surface. Maybe a flat hand slapped repeatedly around the bathtub, (but never directly on the cork) could work. If you choose the pool option, you might like to do a running ‘bomb’ into the water, shouting TAKE THAT SUCKERS! as you land near but not quite on the cylinder! Ahhh yes, sailing, what a joy! Apparently it’s these moments that really make you appreciate the good days… OK so perhaps I’ve embellished slightly, but so describes my take on the first 4 days of the trip to Tonga. Day two the recurrent meltdown occurred. I lost my footing and slid backwards into the door of the head imprinting the handle on my right butt cheek for the duration of the journey. Later, I was trying to grab a snack and everything fell out of the snack cupboard onto my head, and I quote, “Just so everyone knows, I HATE THIS!!! Only 5 more days you say, that’s 5 days too long!!!”, but I got it over with early this time and seemed to move forward from there! Our autopilot decided it had had enough by the end of day 3 and we were looking at hand steering for the next 600+ miles, (a mere trifle if you’re a Volvo Ocean racer but NEWSFLASH that’s not us!!!!)

I kept singing the Gilligans Island theme song, “Just sit right back and I’ll tell you a tale…”- over and over again… while I was steering…just in my head of course.

We decided to stop at an atoll in the Cook Island chain, known as Palmerston. It was close, we needed a break and it’s further proof that there is ALWAYS a positive to every situation.

Our plan was to fix what needed fixing, (if possible) then continue on to Tonga. We were anchored outside the reef, which was bizarre but calm and we were all just happy to be stopped and relatively still. It poured all evening and we’d been told that if the wind changed and blew from the north we’d have to move on or risk being pushed onto the reef-wow, what options! The wind didn’t change, we stayed on the mooring and the next day Mike worked, seemingly successfully, on the autopilot. I cooked up a storm and we dried out from what had been our wettest passage to date. After some discussion and an invitation to visit the island, we decided it was crazy not to take the opportunity, (I mean how often are we going to sail to Palmerston…) so we organized to clear in the next day and take a tour.

Getting off the boat 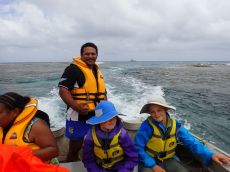 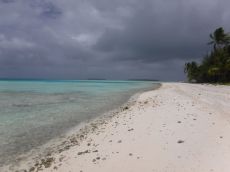 A vision of the Pacific!

Our visit just happened to coincide with the second cruise ship visit in two weeks, which was only the third visit in two years! As a result we were treated to a very big day for the 38 strong population of this tiny little haven. 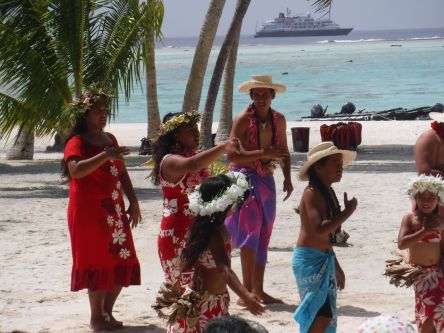 Hmmm thinking about it 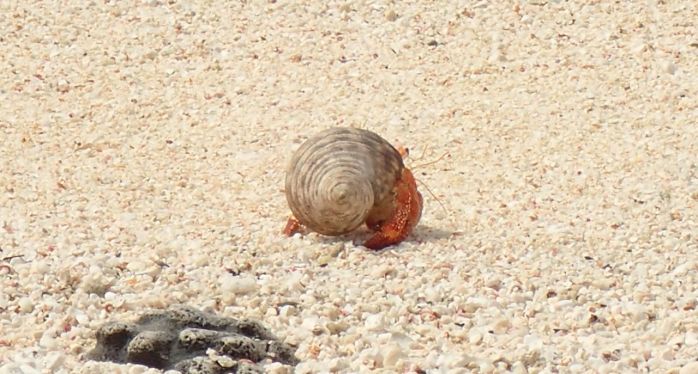 Edward, our host and the local policeman, had invited us to lunch at his home but the cruise ship was delayed, delaying the entire day. We ended up staying for dinner instead. It’s not like we had much else going on and it was wonderful to just hang out all day. Our two had a blast with the local kids, after that initial shy awkward beginning that always seems to precede ‘the best day ever’!!!! Lilly was quite keen to contribute to the blog this post so here is her spin on things.

2 DAYS IN PALMERSTON 8 DAYS AT SEA

Did you think I was going to let Mum take over the blog?

Right, talking too much, back to our adventure

We left Bora Bora on the 10th. It was really bad weather,

Our autopilot failed so being in radio range we contacted

Palmerston Island to see if we could pick up a mooring.

Thankfully they said yes (that was the best news I’d had in days).

Over the radio we where informed that Edward would be our host. He and his son John came and picked us up in their boat, negotiating the reef expertly! We enjoyed 2 amazing feasts with his family. We had delicious chicken, taro, parrotfish, breadfruit, white rice and the freshest, coldest, sweetest coconuts so far!

We also met BOOGIE and FLUFFY their pet Boobies. Every family has a pet Boobie but Boobie is also something they eat- so to avoid mix-ups between families, each pet has a special coloured string tied around its ankle to help stop it becoming dinner!

We played with the local kids all day and had so much fun. I played with Joy who was 9 and another girl aged 7 and Seb had a lot of fun with Tomatoa, Robert, James and Henry. The next day we had another tour of the Island with Matt. It doesn’t take that long to get around. We found two HUGE spotted cowrie shells but they were Edwards and they smelt about as bad as something can smell- the poor creatures were on their way out! 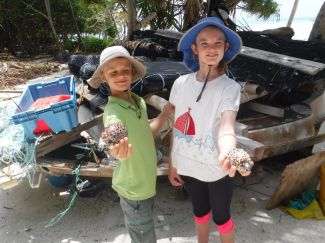 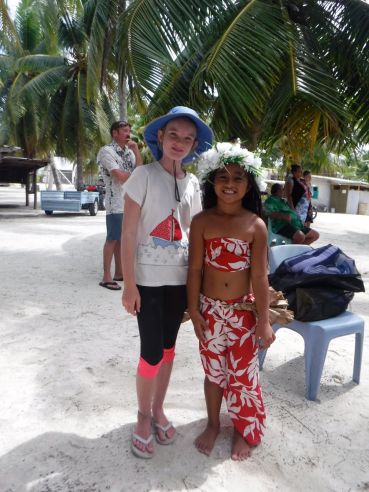 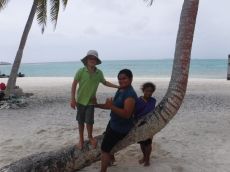 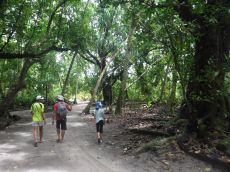 Edward and his family 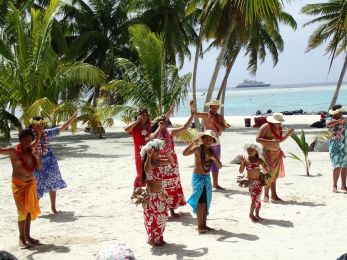 We also saw the local school, which at the moment only has 14 students. It was a lovely building and if the kids hadn’t been on school holidays, I would have loved to visit during their school day. 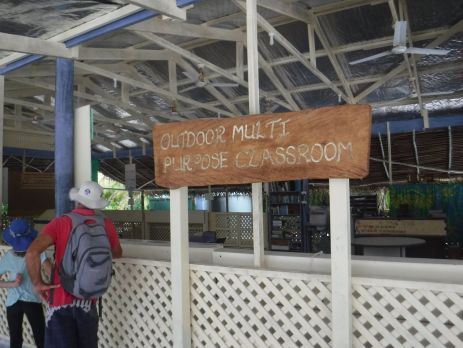 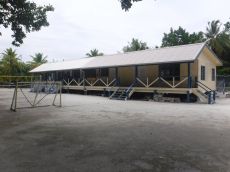 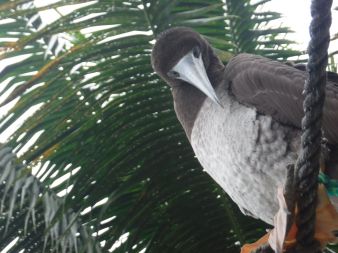 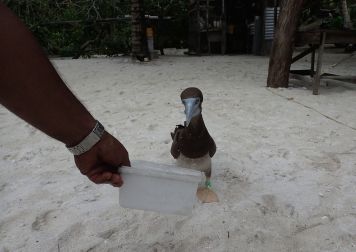 We left Palmerston, for Tonga on Tuesday afternoon- a better passage than the previous 4 days.

We’re all a bit ocean lagged because we crossed the international dateline, missing Sunday altogether. When we arrived we saw LAURATA, our friends boat. It was a very pleasant surprise because we thought they’d have already left these islands by the time we arrived. We rafted up to the dock and saw Davin, Kerry and John. We met a Spanish boat and explored the open-air markets (everything was very colourful). Bear,(our other friends) arrived to our amazement,so we ordered pizza that night and shared a meal together.

So there you go. The people of Palmerston were incredibly generous and welcoming. The island has an interesting history, originally being ‘discovered’ and named by Captain Cook in 1774. Prior to 1863, the island was uninhabited until an Englishman named William Marsters, arrived on the island and made it his home. With the help of his 3 wives- Tepou, Tenioi and Matavia, he planted palms, harvested copra and produced 21 children, whose descendents all inhabit the island today. Palmerston atoll is divided up into these 3 separate families, one group living near ‘town’, Edward’s in the ‘bush’ and the third making up another section of the atoll. We gave Edwards family a few items of clothing the kids had grown out of and a few supplies such as rope and globes that they could use far more than we could. Very small offerings for such hospitality! As far as authentic experiences go, this was, without a doubt, a very special and unique experience for us all.

The wind started to swing around to the north and we got uncomfortably close to the reef, (“Wow, it’s so clear, you can see the bottom now”, “Ahhh that’s because we’re now in significantly shallower water”, “Oh”.

The decision was made to leave. We bid our hosts goodbye and set off towards Tonga. The autopilot started to misbehave again, 30 minutes into the trip, but Mike was straight on it and had it sorted before you could say…”I’m outta here, I’ll take my chances in the sea!!!!”

…and here we are in very wet and windy Tonga! We’ve caught up with some friends, and had some lovely excursions, along with meeting some wonderful new people- sounds like info for the next post. Now, we’re waiting for a weather window to New Zealand- OMG!!!!!!!!!!!!

To market, to market, so best I wrap it up there, for now.

Until next time, this is Slice of Life, dodging the rain, occasionally going out for pizza and of course, Standing by!

8 thoughts on “Transit to Tonga”