I can assure you the link to where we are, IS working… the winds however have not been in our favour. Consequently, we’ve stayed in Las Palmas, extended our exploration of Gran Canaria, spent New Years with new friends and are now waiting until the Anemoi, (wind gods) blow, and in the right direction- apparently this coming Tuesday January 10th!

Patience and Flexibility seem key to this sailing malarkey- my report card at this stage might say something along the lines of ‘improvement required on certain key factors!’

July and August are almost a distant memory and it seems silly to delve into those early days on the boat. However, like a lot of things in life if you don’t reflect a little bit you forget what you’ve done and how far you’ve come. The extra days here in Las Palmas seems like the perfect opportunity to fill in the gaps.

Our very first post had us casting off the dock lines and leaving Valencia. All of a sudden it was December and we were sipping Moroccan mint tea and wandering amongst the Souks of Rabat and Fez. Sorting out the blog and internet took time but so did finding the right head-space to share the experience.

There’s quite a bit of the ‘in between’ that probably doesn’t need to be shared, although I’m keen to give people an authentic view of life on board, from my perspective of course! Facebook Fabulous gets a bit boring after awhile, I’ve never been that good at faking it!

I personally felt incredibly restricted in/on the boat, both physically and mentally. There wasn’t any space or way to switch off. My bathroom time became a public event, (this isn’t any different from home I guess apart from the fact that the area is approximately 1m by 1m!). I hated the noises the boat made, the constant movement, the bloody nautical terms!!! Sheets and halyards, boom-vang and foreguy, (all different ropes by the way and as there’s so many of them they need different names to differentiate them) whatever they’re called they could all go to hell as far as I was concerned. As for the Head, the only reason I could find for calling the toilet the head was because it’s where I wanted to shove mine most of the time!

Sea sickness, plummeting self esteem, second guessing myself all the time, feeling like an absolute wally at everything as everything needs to be done in a certain way (and there’s nothing like having your husband tell you how it all needs to be done), one child going through very early puberty, and being overtaken by this apathetic, almost complete disinterest in anything to do with sailing, have meant our first few months have been anything but smooth sailing.

I have on many more than one occasion considered changing the name of this blog to www.If#ckinghatehomeschooling.com.- the link doesn’t work by the way I already tried it! I could go on and on about the ‘joys’ of this task, but all I’ll say for now is one child hates maths and will do everything she can to get out of it, including starting major fights. The other has not enjoyed anything to do with writing and his fierce competitiveness means stroppy belligerence when he’s not keeping up with his older sister I’m Mum to them, not their teacher and the rubbish they pull on me would never happen to their teachers in a regular school. I take my hat off to all teachers, especially the good ones- Stevie that’s you!

I think, (fingers crossed, toes crossed, everything crossed) that we are making progress, but many a tear has been shed during our sessions and not just by the small people!

It can be hard to have a mirror held up to your face for so long and so often, especially when you’re so damn unsure of your appearance!

Anyway, enough of all that… we’re still here, that is the 4 of us on the boat, finding our way and learning on a daily, sometimes hourly basis how we can make this work. As a new friend, now seasoned but previously novice sailor and fellow Victorian told me the other day-‘ you can’t shrink from this experience- you can only grow! You can’t go back’

Speaking of going back… here’s where we’ve been.

I touched on the fact that we went to Mallorca after Formentera. From Mallorca we sailed to Menorca picking up our dear friends The Marco/Martinez clan and proceeded to almost circumnavigate the island with lots of land based exploring on the way. It was only our second week on the boat so we were well and truly adjusting to it all- thank you Juan and Laura for remaining friends with us after a week together in a small space!!!! 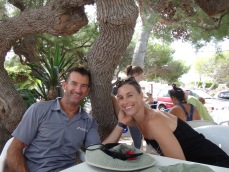 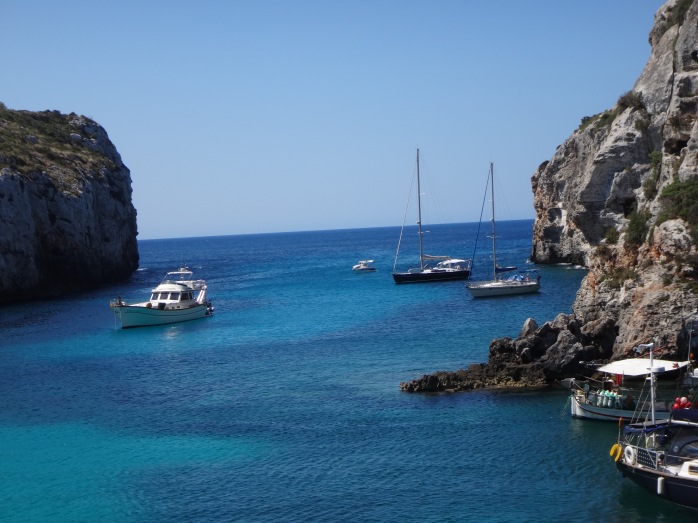 From Menorca we sailed across to Sardinia, spending far too little time in the Maddalena Islands before picking up Mike’s childhood friend Monty, his wife Claire and son Flint. We rendezvoused with them in Porto Ercole, then moseyed our way to Giglio, (literally the Island of Lily’s) Elba and then Capraia.

There was much exploring, swimming, jellyfish avoidance and gelato consumption during our time together. New games played, silly songs invented, a simultaneous bushfire and shipwreck exploration and surprising harmony between 2 boys aged 7 and 11 and a 9 year old girl. 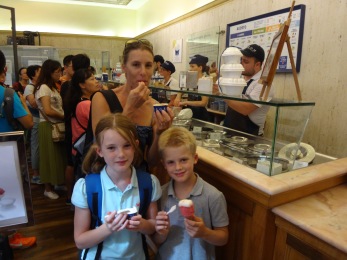 We said our Arriverderci’s in Pisa and spent a few days exploring the surrounding area, using the buses and trains. We visited the Leaning Tower, (yes we got the cheesy photo holding it up) and discovered a fabulous interactive Leonardi Da Vinci Museum in Florence. 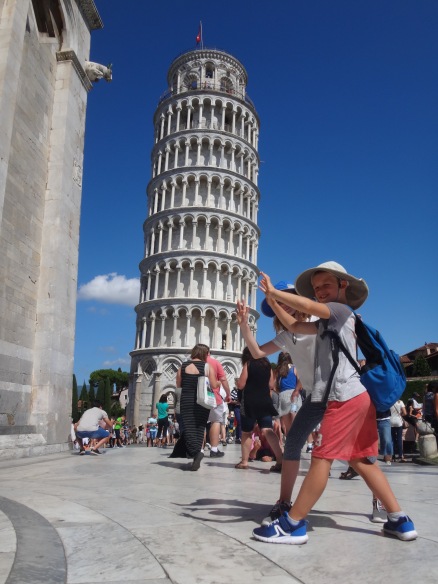 oh yeah here we are in Pisa 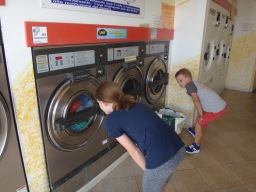 entertainment in the laundry 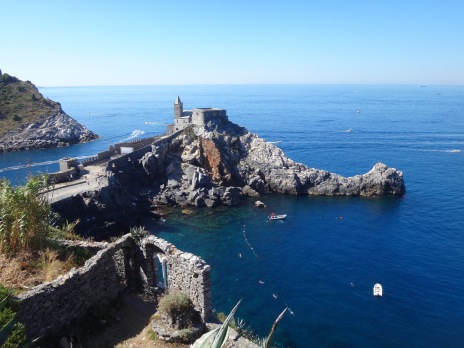 Fabulous, fabulous despite the crowds.

We then went from Pisa to La Spetzia, Porto Venere, then along the Cinque Terre, stopping in Vernazza, then Sestri Levante. Portofino, Varazze and San Remo completed our time in Italy and we continued along the Riviera to France. We anchored in a beautiful spot beside the Ille de Sainte Marguerite just off the coast of Canne. The Man in the Iron Mask is supposed to have ‘resided’ in the prison found here for 12 years. We visited some spectacular places, including Sanary sur Mer, La Ciotat- thank you Lisa, Lilly and James for coming to visit and The Calanques. 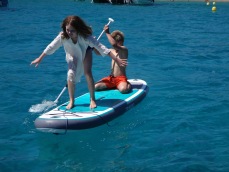 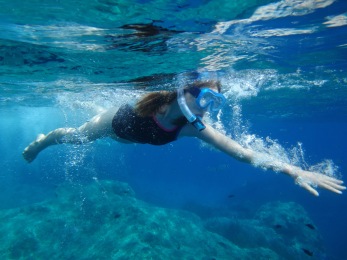 Before we knew it, we were heading to Barcelona to put the boat up on the hard.

Mike headed back to Sardinia and then France for work and the kids and I headed to France and England for the next 5 weeks.

I’ll detail that trip in the next post, this one is already getting a bit long.

For now, from us all on SOL- May 2017 bring you health and happiness wherever you are in the world.

3 thoughts on “Filling in the gaps…”